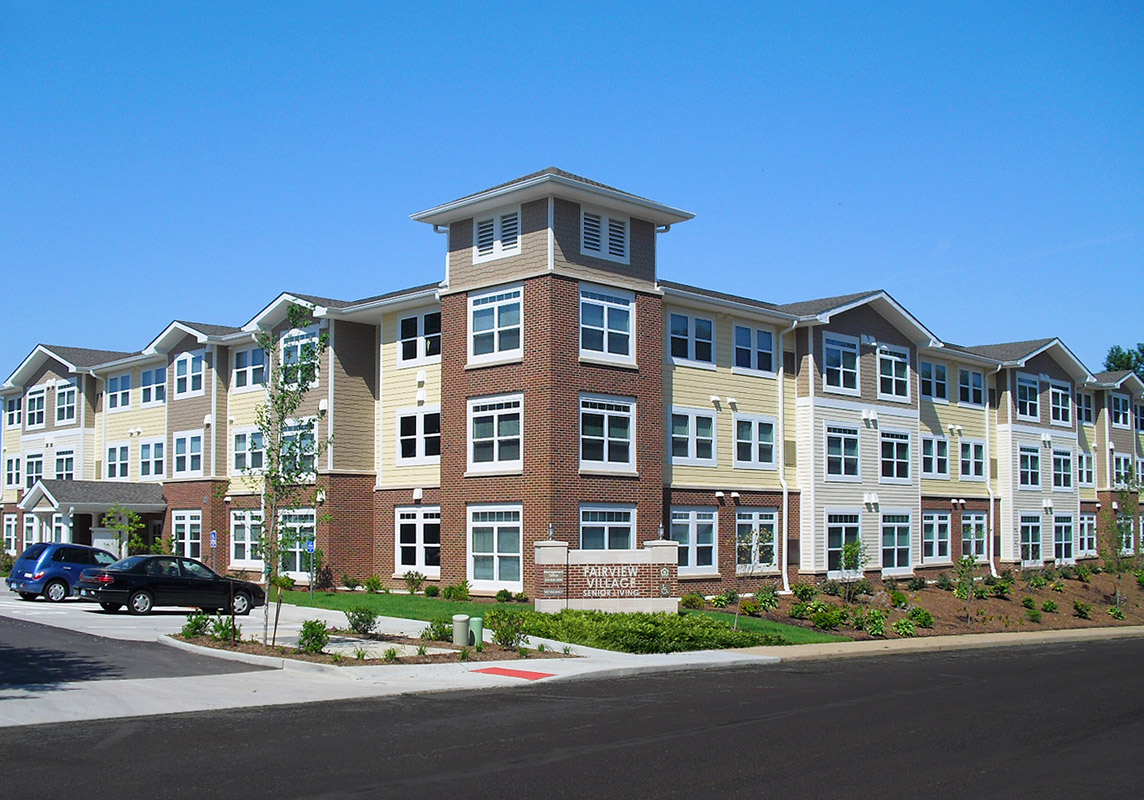 Fairview Village Senior Living received an award as a finalist at the Associated General Contractors of St. Louis' 2011 Keystone Awards Ceremony. Congratulations to our client, RISE (fka RHCDA), project architects Rosemann & Associates, Project Managers Phil Krull and Tiffany King, LEED AP BD+C, and all others who worked on the development for their outstanding work. A Keystone Award is not based on beauty but is given to general contractors that exhibit excellence in providing solutions to unique obstacles and challenges specific to a project.

Fairview Village began as the proposed rehab of the vacant Corpus Christi grade school on Switzer Road in Jennings, MO.  Due to the difficulty of redesigning the existing floor plans and considerable cost issues, the owner concluded it was best to simply remove the existing structure, including the former gymnasium, and build new; but extensive demolition procedures and poor soil conditions proved to be major obstacles of their own.

The existing building had a poured concrete with bar joist floor structure, which made demolition more difficult.  Additionally, we discovered soil issues, including buried foundations from buildings removed previously and a trash pit that had to be completely dug out.  In some areas the soil would not meet inspection standards, so those areas were dug out and re-compacted with a granular and soil mix.

The project was to be completed within a 14 month schedule, but the extensive demolition procedures and the poor soil conditions created delays early on.  The delays would not have been terribly detrimental, except that RHCDA’s turnover schedule for units could not be adjusted per its agreements with lenders.  This required us to turn over units in an unusual manner.  We met with representatives of the City of Jennings and received approval to do a floor-by-floor turnover, which is not very common with this type of building.  We turned over floor one first, followed by the ground, 2nd and 3rd floors.  This process required extraordinary effort, but it allowed the owner to meet the obligations of its lenders.

Adding cost was a major concern for the design since the development is low income housing, and the budget was absolutely set with lenders, but our mission was to obtain Enterprise Green Communities Certification.   To do this we focused on three main areas (though not exclusively): 1) salvage and recycling of materials at the site, 2) implementation of storm water retention measures and 3) installation of energy efficient mechanical and lighting systems where possible.

Weekly team meetings were held among the project ownership, architects, engineers and E.M. Harris Construction to review sustainable features and to integrate as much “green” as possible, while balancing the cost impacts throughout the project.

Over 90% of the trash generated by the project was able to be salvaged or recycled.  Most notably, the existing school building was demolished, crushed on site and used as structural backfill.  The net recycled content value for all materials used on site (excluding electrical, mechanical and plumbing) was 18%.  This included recycled content steel, carpeting, drywall and acoustic ceilings.  A permeable paver system was installed in the parking areas and two bio-retention areas were planted to reduce storm water run-off.

RHCDA also required us to meet MBE/WBE participation that exceeded county requirements.  Despite being a larger-scale project, we were able to maintain approximately 19% MBE and 18% WBE participation and hired Section 3 certified laborers. We are happy to say that we met the high standards set by RHCDA and delivered the project on time and under budget.